One Pride One People goes to the Kings!

From Mo: I would like to say a big ‘thankyou’ to all the people who helped in any way to make ‘One Pride One People’ the huge success that it was last night. When the curtain came down for the final time I realised we had just seen ‘the best ever’ performance of the show to date and I know that we will carry those memories for a very long time. The trials and tribulations of getting the show together disappeared after the standing ovations we received. The Kings Theatre team said we were the most organised and disciplined group of young people they had worked with in a long time and would welcome us back at any time. The overall experience for the Dynamo Youth Theatre cast will be everlasting. – Mo

One Pride, One People is a musical set against the background of real historical events that took place in Portsmouth during the First World War and its aftermath. On top of the traumas of the millions of casualties which touched every family, were the economic hardships which followed the War’s end. The much hoped-for environment of ‘Homes fit for Heroes’ didn’t happen and towns like Portsmouth which had been so vital to the War effort, found themselves in a spiral of job cuts and ever reducing wages which ultimately led to the General Strike of 1926.

One Pride, One People celebrates with stunning musical numbers, the spirit of the people, which kept the community and friendships alive, despite the unemployment and hardships. 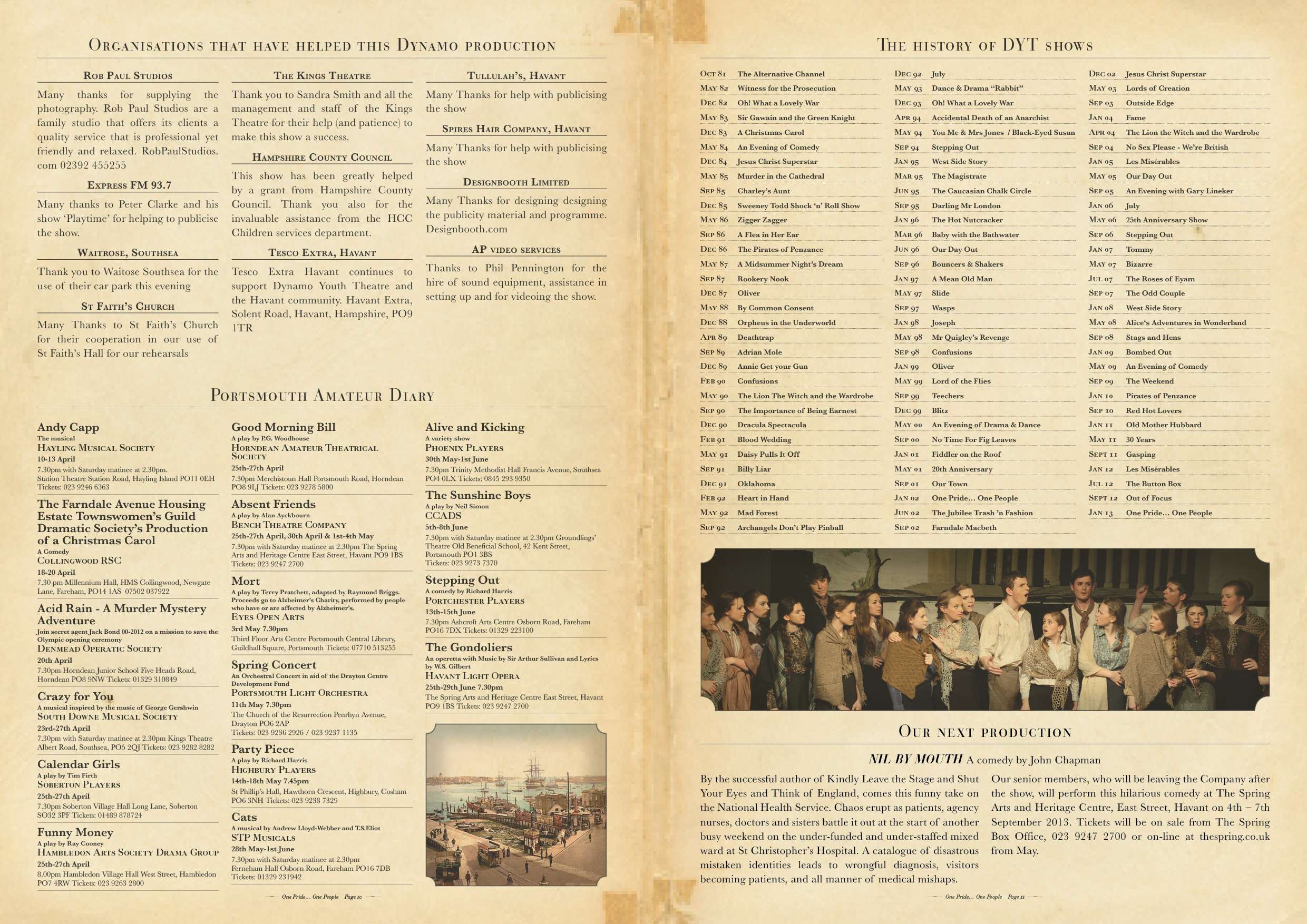 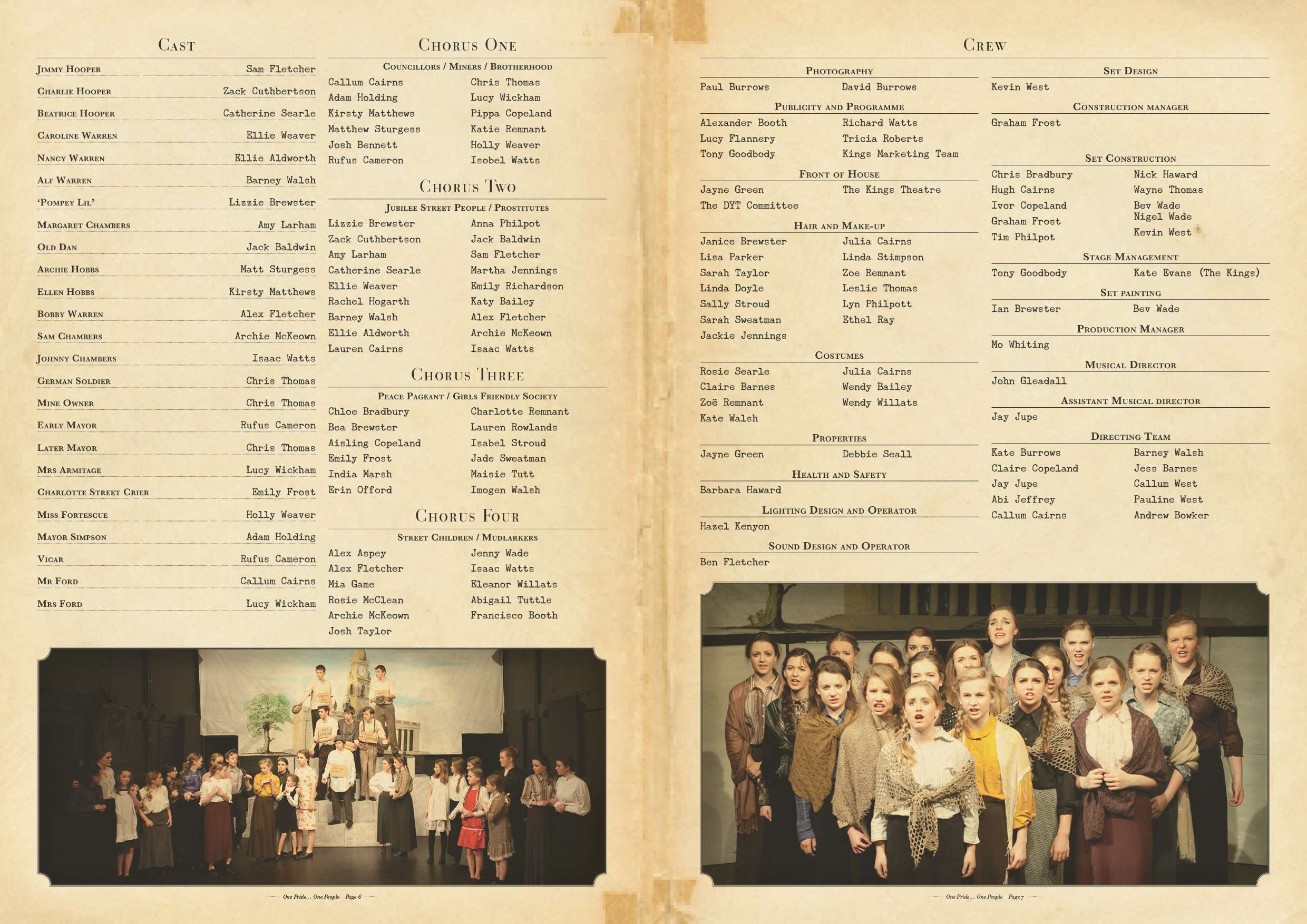 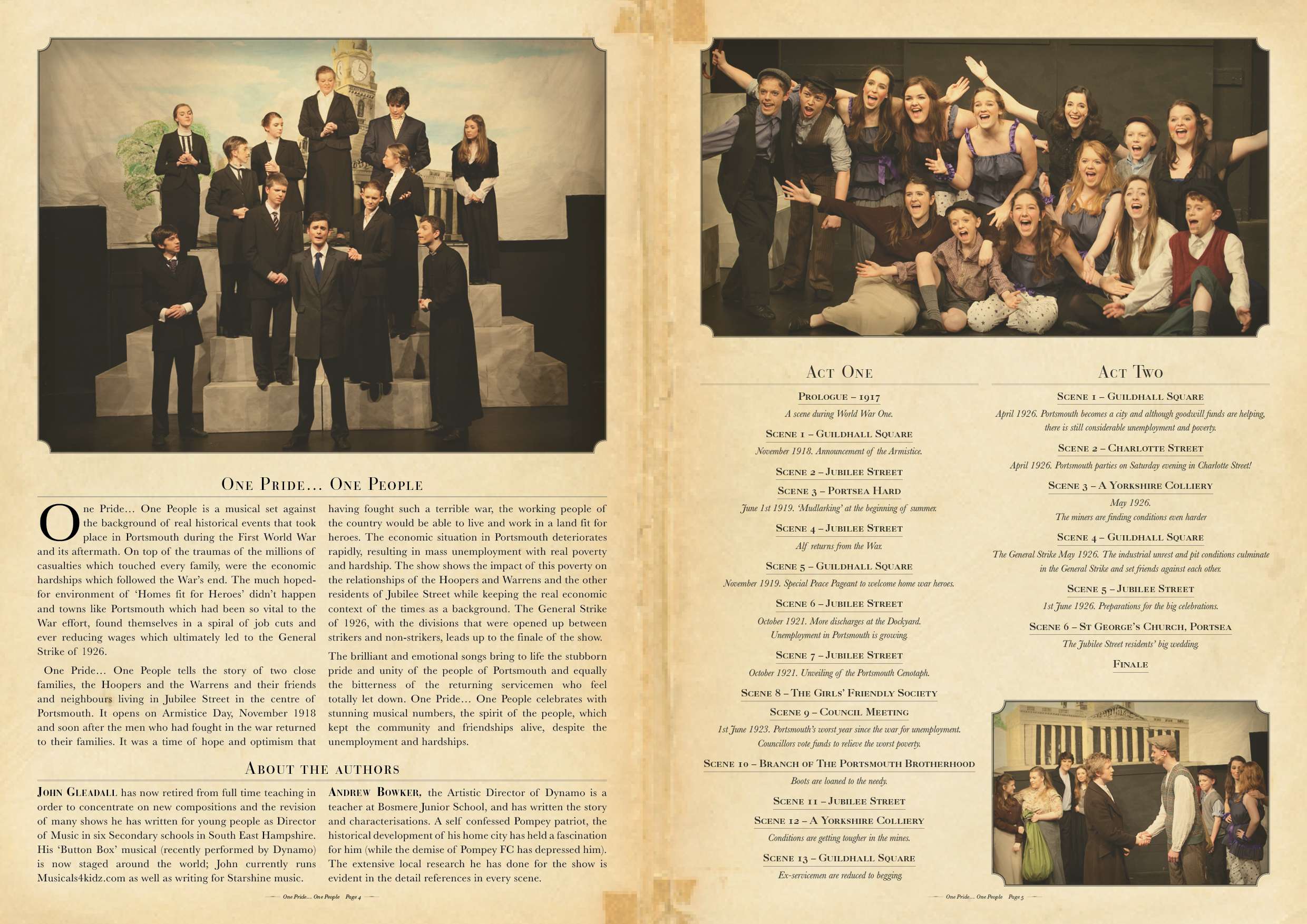 Welcome to Dynamo Youth Theatre’s production of One Pride… One People. After the very successful run at The Spring in January, we are very excited that we have been offered the opportunity by The Kings to perform in this beautiful and historic theatre. We are sure the cast will rise to the occasion of performing in a professional theatre on a night they will remember all their lives.

This is the second time that Dynamo have performed at The Kings. Back in the last century (Easter 1998 to be precise) we performed another John Gleadall musical, Mean Old Man – a show with a very different theme than One Pride. Both projects have the same objectives, though: to give the audience an entertaining night out, showcase the members’ talents and the capability of the whole organisation to produce a professional show.

In the 15 years since we were last at The Kings, there has been a lot of water under the Dynamo bridge. Dynamo has changed considerably – we are now based in St Faith’s Church Hall, have become a registered charity and have performed in a number of very different venues, all keen to welcome us. Despite the changes to where we rehearse and perform, our purpose of providing a creative environment where young people can develop their skills and talents and realise their potential, remains the same.

This continuing success can only be achieved with the help of the adults who give up huge amounts of their spare time to work backstage, organise and administer the Company and, of course, creatively direct the Company.  A massive thank you to all of them.

Our enthusiasm to push the company forward centres on raising funds to secure a permanent base while continuing to keep members’ subscriptions at an affordable level. We would be very grateful if you could consider whether you could sponsor us – there should be a form with this programme.

Thank you for coming this evening. We all hope you enjoy the show and look forward to seeing you at our next production at The Spring in September.

The reviving of One Pride… One People after a gap of 10 years, has, I am sure, stirred a great many memories for the large number of us who were involved in the show the first time around.

For me, my mind wanders back to warm summer days spent in the Portsmouth Reference library and in listening to the personal accounts and recollections of a number of Portsea residents, as I learned first hand of the devastating effects of the First World War on the lives of everyone in the years immediately following the Armistice in 1918. With little in the way of welfare, pensions, quality education or health care, everyones lives were dominated by the need to hold down some sort of job, and for a city like Portsmouth, where so many men had contributed to the war effort by succeeding in the race to build the mightiest navy in the world,- the subsequent loss of jobs in the immediate post war period had a devastating effect on the city as a whole.

While the story of One Pride is fictitious in its specific characters, I am in no doubt that all the detail in the show is accurate, and is in no way too far fetched. The suffering endured by the citizens of Portsmouth in the 1920’s was, I believe unimaginable by today’s standards, but perhaps more importantly, the ever presence of real community in a crisis which never lets the human spirit die, transcends even the most hopeless of situations.

The whole world experienced major economic decline as a result of the First World War, but One Pride is unashamedly about our local city, and the strong feeling of pride we should feel towards all those people who have helped shape its form.

John Gleadall, myself and everyone here at DYT hope you enjoy the show.

One Pride… One People

ne Pride… One People is a musical set against the background of real historical events that took place in Portsmouth during the First World War and its aftermath. On top of the traumas of the millions of casualties which touched every family, were the economic hardships which followed the War’s end. The much hoped-for environment of ‘Homes fit for Heroes’ didn’t happen and towns like Portsmouth which had been so vital to the War effort, found themselves in a spiral of job cuts and ever reducing wages which ultimately led to the General Strike of 1926.

One Pride… One People tells the story of two close families, the Hoopers and the Warrens and their friends and neighbours living in Jubilee Street in the centre of Portsmouth. It opens on Armistice Day, November 1918 and soon after the men who had fought in the war returned to their families. It was a time of hope and optimism that having fought such a terrible war, the working people of the country would be able to live and work in a land fit for heroes. The economic situation in Portsmouth deteriorates rapidly, resulting in mass unemployment with real poverty and hardship. The show shows the impact of this poverty on the relationships of the Hoopers and Warrens and the other residents of Jubilee Street while keeping the real economic context of the times as a background. The General Strike of 1926, with the divisions that were opened up between strikers and non-strikers, leads up to the finale of the show.

The brilliant and emotional songs bring to life the stubborn pride and unity of the people of Portsmouth and equally the bitterness of the returning servicemen who feel totally let down. One Pride… One People celebrates with stunning musical numbers, the spirit of the people, which kept the community and friendships alive, despite the unemployment and hardships.

John Gleadall has now retired from full time teaching in order to concentrate on new compositions and the revision of many shows he has written for young people as Director of Music in six Secondary schools in South East Hampshire. His ‘Button Box’ musical (recently performed by Dynamo) is now staged around the world; John currently runs Musicals4kidz.com as well as writing for Starshine music.

Andrew Bowker, the Artistic Director of Dynamo is a teacher at Bosmere Junior School, and has written the story and characterisations. A self confessed Pompey patriot, the historical development of his home city has held a fascination for him (while the demise of Pompey FC has depressed him). The extensive local research he has done for the show is evident in the detail references in every scene.