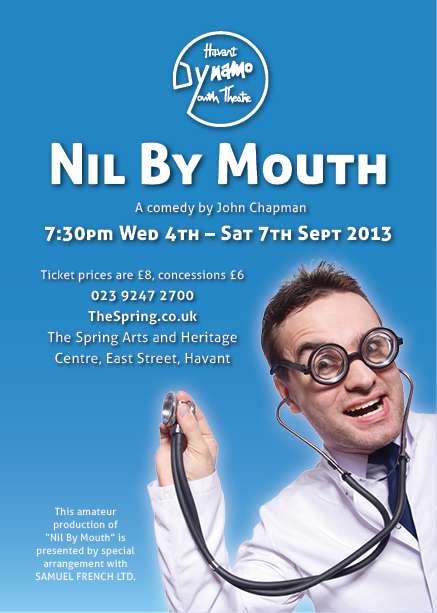 Dynamo’s next show will be the acclaimed comedy by John Chapman “Nil By Mouth” performances are from the 4th September to the 7th 2013. Ticket prices £8, concessions £6 available from the Spring Arts and Heritage Centre, East Street, Havant 023 9247 2700 www.thespring.co.uk. We hope to see you there.

At a time when over 3,000 complaints a week are made by hospital patients, John Chapman’s hilarious comedy could not be more appropriate.  Set at the weekend in the under-staffed under-funded St Christopher’s NHS hospital, this highly amusing farce is a catalogue of disasters from mistaken identities to wrongful diagnosis!  Utter confusion ensues with wards named after poets, patients with poet’s names and an unscheduled hospital assessment inspection right up to the imaginatively choreographed curtain call.

Graham Frost’s impressive set of cubicle curtained hospital beds and well sourced props that include bleeping screen, mobile drip-feed and flashing alarm alongside accurate costumes give great authenticity to the comedy.  Under the direction of founder Andrew Bowker, this hugely talented fledgling cast of 12, though not exactly restoring our faith in the NHS, positively provided the best medicine ~ in the form of non stop laughter.  These sixth-formers, now about to embark on their future adventures, university et al, have amassed a wealth of confidence and commitment during their years with this impressive youth theatre group, consistently encouraged and nurtured by a large energetic support crew.

There is much to commend this young cast who should feel justly proud of the comic mileage teased out from their brilliant production of this modern medical farce and I wish them well on their chosen future paths.