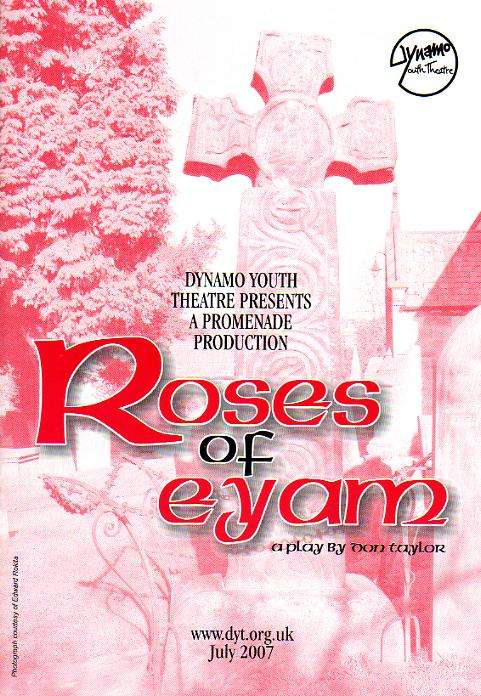 The Making of the Roses of Eyam Snowman
By Steve Phillips

When Andrew Bowker first asked me to make a full size snowman prop for the Roses of Eyam play, I knew it would be a big challenge. This would be something very different from my usual set painting!And just to make it even more interesting, the snowman needed to have a distorted Oliver Cromwell face!

Having never made anything like this before, the first thing I had to decide was what do I make it out of? I decided that the best, low cost option was to use papier mache applied over a frame made from wire netting (chicken wire).Google images of Oliver Cromwell

Before starting the build, I needed a basic design. Google Images is always good for inspiration, so I searched on “snowman” and “Oliver Cromwell” and found some useful pictures. I then did a couple of sketches and had a rough idea of what I wanted to do.I knew the design might need to adapt to suit the materials I was going to use.

Materials used to make the snowmanThe first part of the build was to construct the frame.I bought a roll of wire netting, and used this to make two cylinders. Cuts were then made around the top and bottom of each cylinder, and the netting was bent and fastened to form two large “snowball” body sections. The two body sections were then fixed together using wire. Next, two pieces of wire netting were used to make the shoulders.The edges of the wire pieces were bent over to secure them to the body.

Frame made from wire nettingOK, so far so good, but how was I going to make the head? Various materials had been suggested to me (including polystyrene), but by now I felt pretty confident in using wire netting, so decided that Id use strips of netting to form the basic head shape. It also allowed me to model Oliver Cromwells long hair. Finally, I used more wire netting to make the arms and hands.

With the frame finished, I could then start on the papier mache. For the first layer, I used newspaper and PVA glue. Getting the paper to attach to the wire was tricky, and with hundreds of pieces of paper to glue on, it was very time consuming. But at least I could now see the snowman taking shape.

First layer of papier macheFor the second layer, I used white A4 paper. This went on easier, but was still taking a long time so I hoped the snowman wouldn’t need a third layer!

It was at this stage that I had to make some modifications to the base to increase the diameter and make the snowman more stable. It was an unwanted delay, but these happen when you’re making something for the first time. I had some good news though when I tried fitting the snowman in my car. It just squeezed in, so transporting it to the church would be easier.

Snowman with second layer of papier macheBack to the build and I knew the most critical part of the snowman would be the face. So having finished applying the white paper layer, I started to construct the basic structure of the face using cardboard (old cereal packets!) held together with parcel tape.

Face structure made from cardboardI then used more cardboard and folded pieces of newspaper to add features like eyes, eyebrows, nose, lips, etc.A skin of papier mache was then applied.

After applying an additional layer of papier mache around the base, all that remained was to paint the snowman and make the sword. I chose a textured ceiling paint as this was thick enough to cover the edges of the papier mache paper, but was still quite flexible. For the sword, I used the handle from a broken garden rake. Holes were cut in the top and bottom of the snowman’s hand to locate it.

It was great to see the snowman in the Roses of Eyam production, and I was pleased it survived the week of performances!

Building the snowman was hard work, but very enjoyable and my advice to anyone taking on a similar project is to just have a go; you’ll be surprised what you can achieve and it’s very rewarding in the end. Good luck.